PMS (Pre-Menstrual Syndrome)  is a condition that affects a woman’s emotions, physical health, and behavior during specific days of her menstrual cycle, usually just before her menses. Mood swings, sore breasts, food cravings, exhaustion, irritability, and sadness are just a few of the indications and symptoms. Premenstrual syndrome affects as many as three out of every four menstruation women.

PMS symptoms normally appear five to eleven days before menstruation and disappear after menstruation begins. PMS has an unknown etiology.

Many scientists believe it has something to do with a change in sex hormone and serotonin levels at the start of the menstrual cycle.

During specific periods of the month, estrogen and progesterone levels rise. Mood swings, anxiety, and irritability can all be caused by an excess of these hormones. Ovarian steroids also affect activity in areas of the brain linked to premenstrual syndrome.

Premenstrual dysphoric disorder (PMDD) is a significant health condition that is related to premenstrual syndrome (PMS). In the week or two before your period, PMDD produces significant irritation, melancholy, or worry. Symptoms often subside two to three days after your menstruation begins. You may require medication or other forms of treatment to alleviate your symptoms.

Riya is a 32-year-old woman. She is the mother of two children, a five-year-old boy, and an eight-year-old girl. When Riya is on her period, she becomes irritated and grumpy. She can’t focus on her work; she becomes anxious and stressed about her deadlines, which she manages well for the rest of the month. She is also depressed and frequently weeps over insignificant stuff. She feels bad about being furious at her kids for no cause, but she’s unable to stop it. Riya’s mood fluctuations have an impact on her personal, professional, and social lives. When she discusses consulting a psychologist with her husband, he dismisses her as ‘simply PMS thing.’ When Riya finally sees a doctor, she is diagnosed with PMDD and begins seeing a psychologist.

The physiological and hormonal changes that a woman goes through during her menstrual cycle are referred to as premenstrual syndrome (PMS). The alterations usually happen in the second half of the cycle, and the symptoms may go away as menstruation starts. However, some women’s PMS symptoms are so severe that they negatively impact their quality of life. This is known as premenstrual dysphoric disorder (PMDD).

While over 75% of women experience mild PMS symptoms, PMDD affects approximately 3–8% of women1. At first, look, bloating, sore breasts, muscle or joint discomfort, exhaustion, sleep problems, food cravings, and mood swings appear to be symptoms of both PMS and PMDD. However, they differ in terms of the severity of the problem.

• Depression: While PMS depression makes one feel (momentarily) sad, someone with PMDD may feel severe sadness, hopelessness, and guilt, as well as suicidal thoughts.

• Anxiety: In the case of PMS, anxiety may be very moderate or non-existent. PMDD is a severe form of anxiety that leaves you feeling tense and ‘on edge’ all of the time.

• Mood swings: Mood swings are normal in women with PMS, but they are severe in those with PMDD. Women frequently feel out of control of their lives, and they are prone to picking conflicts over trivial matters.

• Life outlook: During PMS, women often feel unhappy and disconnected from their lives. PMDD causes women to lose all interest in their families and jobs, and they may desire to stay in all of the time.

A woman must have 5 of the following 10 symptoms, including at least one of the first 4, cyclically before menstruation, to be diagnosed with PMDD.

1. A persistently depressed mood, a sense of pessimism, or self-deprecating ideas

2. High levels of worry or tension

3. Emotional shifts that are noticeable

5. Loss of interest in routine activities

6. An inability to focus

7. Tiredness and a lack of energy

10. Breast soreness, bloating, and headaches are among the physical symptoms.

Women with PMS may not require professional assistance to cope with their symptoms, but women with PMDD will.

PMDD has no established cause, however, changes in hormone levels during the cycle are considered to have a role. Both PMS and PMDD are suspected to be associated with depression and other mood disorders, but the direct relationship is unknown: it’s unclear if depression is a cause or an effect of PMS and PMDD. 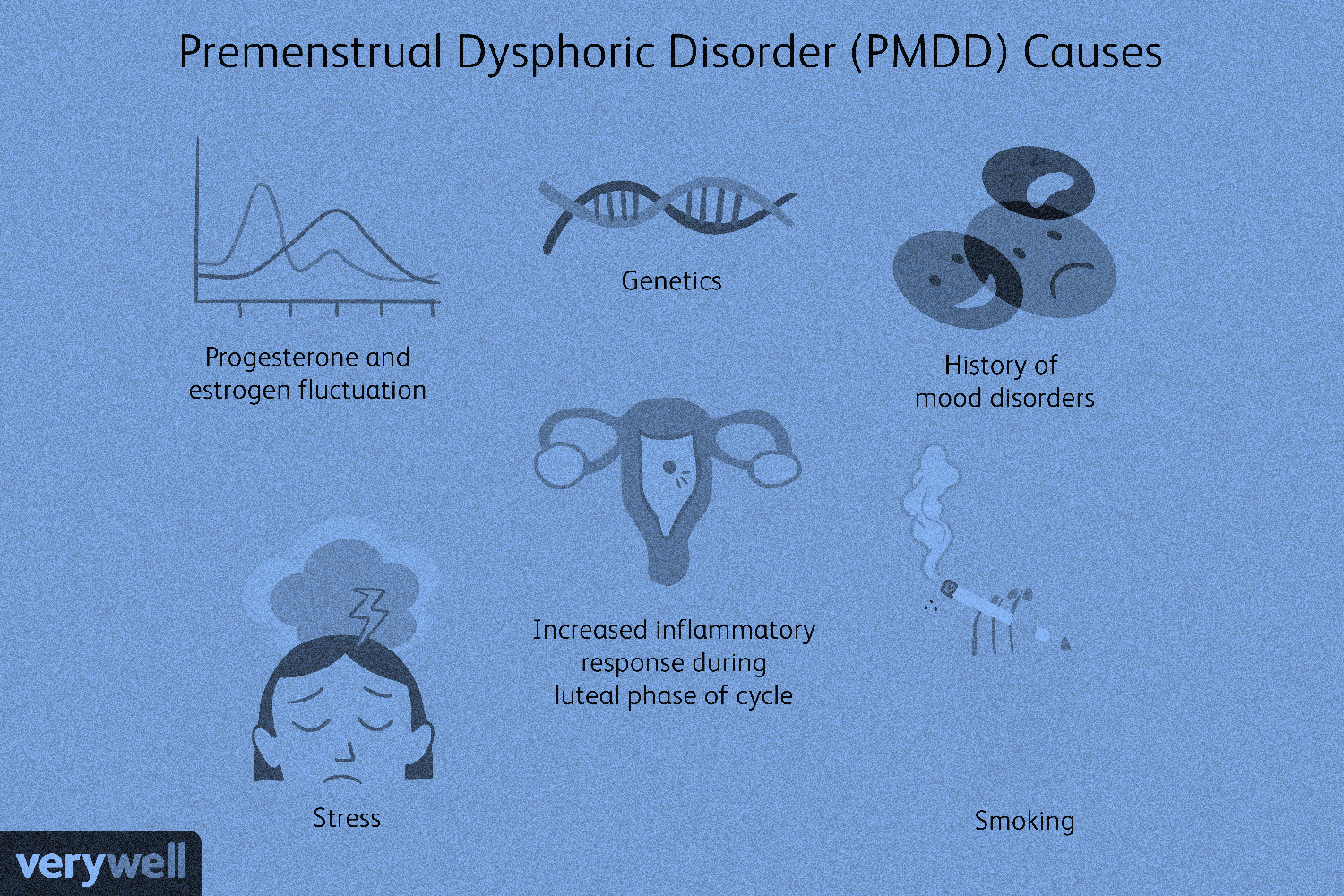 PMDD is diagnosed in a variety of ways.

There are no formal tests to diagnose PMS or PMDD, but the doctor can determine based on the degree, duration, and intensity of the symptoms. A doctor will frequently offer you a journal or a chart to fill up throughout two menstrual cycles. The chart normally includes information about the person’s mental state, medical symptoms, as well as eating and sleeping habits. After that, the doctor looks at the symptoms and their severity to determine whether they are PMS or PMDD.

Women are tested for thyroid abnormalities (overactive thyroid) and other psychological problems, such as depression, that may be causing these symptoms in order to get a complete diagnosis. They are treated for PMDD after all other possible diagnoses have been ruled out.
While PMS can be managed through lifestyle changes, PMDD necessitates medical intervention

What is the treatment for PMDD?

The treatment is aimed at improving the woman’s quality of life. Changes in lifestyle, such as diet and exercise, can help to manage PMS. PMDD treatment options include:

• Behavioral techniques: Stress and anger management techniques are used in conjunction with medication.

Technology is undoubtedly increasing in Nepal. More than half of the population have access to the internet, and thus the technology has become a daily...

24 new cases of the Omicron variant were detected in Nepal. Jan 7-2022, Friday The cases were discovered in 1,146 Covid-19 positive random samples collected...